Welp, my truck is still running (yay), but my inverter bit the dust. I don’t think it’s repairable, so have started the return process through Amazon, and gone ahead and purchased another. All things considered, if anything in my system had to go I’m glad it’s this, as it’s by far the cheapest component at under $200.

I’ve decided to use my Amazon Visa to get the 5% back and to stop the immediate bleeding of my bank account. The new inverter is being shipped directly to the repair shop. Interestingly, there are about 20 “lockers” nearby where the shipment could go for me to pick it up, something that I’m sure I’ll find very useful in the future. The repair shop I’m using does the NASCAR thing, so has a small window for the tepair, but Prime shipping will get the inverter there on the 1st – plenty of time. Right? Ugh. As long as I stay put in Vegas there are options.

I have to say that truck stops are great when you’re stuck in an unfamiliar place. Power, food, laundromat, showers, and this one has free movies. They let you stay as long as you need to, and I feel safe. Oh, and unlike at the Tenopah Nv truck stop (elevation of over 6000 ft) with nighttime lows of 19 degrees, here in Law Vegas it only dips into the mid-40s at night. I like that. 🌞 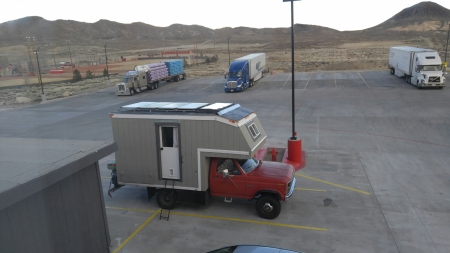 The entertaining part of Vegas is waaay over there

So far the fun level hasn’t been high, but the challenges haven’t been so hard they couldn’t be overcome. And fun isn’t everything. Handling problems without completely falling apart is more important for me for now. Having friends be there for me when I get stressed out has been wonderful. Thanks for the encouragement, you guys! 😀

Hey, I made it halfway to Arizona! The solar system just wanted sun so badly I decided to not head for the ocean first. So far, my truck had a minor breakdown with a $55 bill….and an $850 tow. Wiped out my emergency fund right there, but that’s what it was for, eh? At least my truck is healthy again. Had to get some kinks out of it’s system I guess! The fix was so minor, it was laughable. All the mechanic did was bypass the water extraction thingie and replace it with a bent metal tube. Ah, to know engines….

That was in the Modoc National Forest, in California. The next evening I made it to Reno where I met up with a trucker friend at the Sparks Petro truck stop. Seeing a friend so far from home was great (and weird)! He turned back north and home this morning. But maybe half of the 700 or so drivers here couldn’t go on with their travels due to Interstate 80 closures and chain requirements. That includes little ol’ me. My friend said to me when I asked his opinion about chaining up and going for it, “chains are for getting out of trouble, not going toward it”. Made sense to me!

So here I am, at a huge truck stop in Sparks, Nv. Could be worse; free cable in the tv room, pay showers, laundry facilities, and a safe place to sleep. I’ve made some acquaintances, which is rare for me, so there’s company if I want it. Much nicer than being stranded at the side of the road on a lonely highway, that’s for sure!  Thanks for the memories, California!

But I’d like to continue my journey south. Weather patterns are looking bad through the weekend, so I might be stuck here for days. Please, think thoughts of clear, warm days here for me, and all the other drivers trapped here. 😀 We’d appreciate it.

I am deeply touched that a couple people have contacted me since my last post, checking in to ask if I’m doing ok. As a very solitary person, I’m not used to that! I used to rebel against having to check in with family and significant others, which confused and angered them. Not at all my intention, of course. I was raised by a working, single mom back when that wasn’t as common, and naturally was on my own most of the time. I’ve read that the term “dorky” might have come from “door-key” (aka latch-key) kid, which makes me chuckle. It would be true in more than one sense in my case!  Hehe.

I took a city bus home from my grade school across town, as it was a better school than my local one. (I remember one afternoon I took the wrong bus and how scared and confused I was! I believe that was when I was in the third or fourth grade.) Add in first a bike then later a pony, and I was everywhere other than at home, sometimes with other kids and sometimes alone. I became fiercely independent and adventurous…qualities not easy to combine with trying to build a life with others, especially someone you’re romantically involved with.

But time has mellowed me, or maybe I finally have enough solitude in a regular basis to appreciate being connected to others. The first message I received surprised me. The second made me stop and think about my connection to people. It doesn’t matter anymore if your friends are right where you are. The internet, and probably especially smartphones, has made friendships seriously viable across the globe. For a mostly-loner like me, that opens up wonderful options for connection. It also means I have a responsibility to keep people up to date. This might prove to be troublesome, depending on my mood, but it’s overall a Good Thing. I don’t hate people – I’m not alone for that reason. So, thanks for reaching out to me. Thanks for saying hi. The little things do matter. I’m good, btw. 😃

Here’s me and my boy, taken yesterday after doing a last adjustment on my scooter carrier. I have some bruises today (need to get comfortable putting my green baby up there) but with this task done I’m ready to hit the road!

He’s a handsome one, eh? Learned patience and tolerance from growing up with a crazy mom. Yay? Silver linings and all that.

One last thing today. My scooter is very important to me. She gives me a somewhat similar feeling to riding a horse, gets an incredible 90+ mpg, and is useful for local trips and errands. I would not be able to finance replacement if she were lost to me. So the very last thing to do yesterday was figure out how to (hopefully) deter her theft. A braided wire cable locked with an uncuttable lock is now wrapped around her belly and the carrier. I also have a movement-triggered alarm to put on her at night. Chances are I’d hear anyone messing with her or the truck anyway, but I figure startling a prowler can’t be a bad idea. I also have a motion-activated light to help convince people to move along. And a bad temper towards anyone messing with my stuff.  Given I literally chased away two attacking Komodors (I used to work with dos for a living and am definitely an Alpha) from a friend’s dog I was walking, I think I can be scary when necessary. I’ve been approached by unsavory men trying to intimidate me and scared them off too. So, funnily enough it’s my stuff rather than my person I worry about. I’m awkward in social situations, but don’t mess with me. Grrrr!

I never seem to be able to put my feelings about having PTSD into words. Once again I have to turn to another to do it for me. We all struggle in different ways, but there are universal truths here:

I wrote a post by the same name last spring. Amazingly, I asked this question to my therapist again the other day, nearly a year later and my reaction was exactly the same when he answered, “…

Source: Wait, What? I still have PTSD

The Day-to-Day Life of a Rational Mystic

The Life of Service Cats

A Good Blog is Hard to Find

Welcome to the world of cats!