I think it’s high time to document some of the inner workings of Oliver’s Nest, starting with one of the things that took the longest to fully assemble: the plumbing.
Being a simple system, without water heater or electric pump, I thought it would go together quickly, once I decided on all the parts. Not so!

It took at least three visits to the local big box store and several reworkings  to get it assembled. The issue that caused the most problems was not having a normal drop between the sink drain and the waste water holding tank. I was determined to have as standard a system as possible, which included the p-trap to capture odors. The inclusion of the p-trap lessened the already shallow drain slope, but not enough to keep water flowing the right way. The big problem was getting the semi-flexible tube to run properly. It was at an angle that caused the end to want to pop off…once it was even coaxed/forced onto the piping to begin with. I’d read that others had the same problems with this tubing. It’s difficult to work with, but once attached is durable so worth the trouble. I finally searched out my extra hose clamps left over from rerouting the fuel lines and used a couple of those to ensure the tubing would stay put even through the rockin and rollin of the house on bumpy roads. Problem solved?
Well, yes and no. After using one gallon jugs for a couple months for fresh water, I finally stumbled upon the perfect sized and shaped five gallon jug at Fred Meters. Sturdy and cheap too, so I snapped one up with joy. Until I tried to fit it under the sink and realized with horror(!) that the plumbing I’d sweated over would have to be redone to allow the new addition to sit in the right place. Ugh!
So yeah, being me, I put it off for about a week, working up the courage to tackle that damn tubing again. Yesterday I finally confronted it, and wonder of wonders, it went together relatively smoothly. Thankfully, Amazon only sells this tubing in ten foot pieces so there was plenty left to cut the longer piece needed, and is now in its new configuration. Here is the pump I have.  This is the water jug I found, and quite a bit cheaper at Home Depot.

All tight and tucked away. 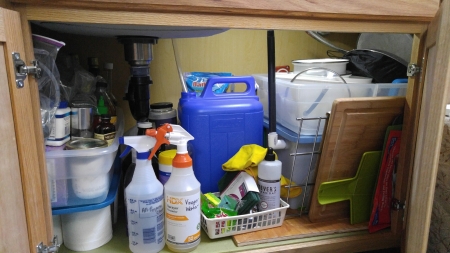 Everything back in place.

6 thoughts on “Plumbing the Depths of Inexperience”

The Day-to-Day Life of a Rational Mystic

The Life of Service Cats

A Good Blog is Hard to Find